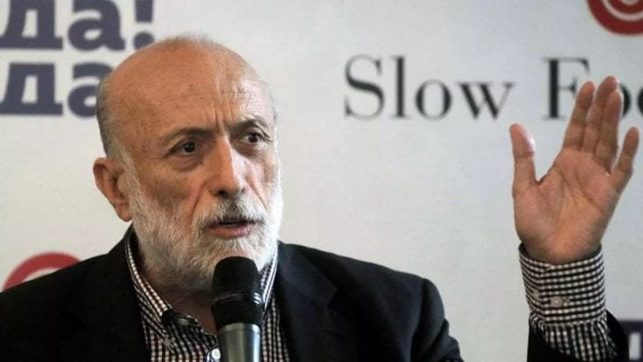 McDonald’s changed for the better after this battle at least a little: he started putting in his preparations Italian PDO agri-food products, and also, started a greener and more sustainable path.

The challenge to Amazon promises to be much more complex and tough.

As beautiful, pleasant and all downhill is the side of Amazon – Bezos towards the consumer, so hard, ruthless and uphill, the way of the small supplier.

The writer’s company had to resort to a lawyer two years ago to end its relationship with Amazon, just think: a registered letter, unsubscribing, sent to headquarters in Milan, has literally disappeared! No trace of it has been found.

It is difficult for the consumer, especially the young one, who is continually vexed in so many ways, to believe these statements.

On the door of Amazon – Bezos reserved for suppliers, Dante’s verse would not disfigure: “Leave all hope, you who enter.” (Inf. III, vv. 1-9).

But let’s go back to Slow Food and Carlin Petrini, its founder, he left the presidency of his creation to Edward Mukiibi, a Ugandan born in 1986, the exact year Slow Food was founded.

A date and a destiny!

But Slow Food is not looking for enemies to destroy them, but to change them, as it did with McDonald’s.

“Petrini’s challenge concerns food in its essence: what first of all feeds us, changes our lives, makes us better, is a source of income and above all, transforms itself daily into one of the most powerful political acts that man can put in place: eat. ” (Luca Ferrua – “La Stampa” 26/09/2022)

“But Petrini’s challenge does not aim at overthrowing Bezos’ creature, because Carlin is not Don Quijote de la Mancha, he aims to open a dialogue, he aims to illuminate a beacon on all those who are enveloped by the logic of comfort and delivery. The victims of a supply chain so short that it becomes a noose for farmers and not only. ” (idem)

Amazon, the symbol of an economy that cuts small producers at the root, that world that Slow Food tries to enhance with the principals, with the philosophy of uniting to be stronger.

“In the world there are 500 million small companies that guarantee food to 75% of living beings. Yet they are nothing compared to multinationals. And do you know what the paradox is? That the products made by poor farmers give excellence to the tables of the rich and the hyper-processed products by the industries end up with the poorest. ” (Lorenzo Cresci -La Stampa 09/26/2022)

Not to mention the destruction of biodiversity by food multinationals.

“Last year, FAO declared that if this model of agricultural development is not reversed, within ten years we will experience a dramatic situation for food sovereignty and nutrition across the planet. There is a problem of soil fertility, which is reducing dramatically.

The available data speak for themselves: in the last 70 years we have destroyed three quarters of the agrobiodiversity that farmers had selected in the previous 10 thousand years. Few multinationals have taken control of food, patenting hybrid seeds, fertilizers, pesticides and herbicides. The use of traditional techniques that are part of agroecology must absolutely be recovered. Roofing, green manure, mulching, rotation with legumes, are all ancient but fundamental techniques which – if not practiced – must be replaced with the addition of chemical fertilizers from fossil sources, which implies a concatenation of all elements. negative for CO2 emissions.

Hyper-technological agriculture requires large investments and a concentration of economic power. It means imagining an agricultural model made up of ever larger farms, ever greater concentrations. It is an idea of ​​agriculture conceived for multinationals. “

Multinationals that, we add, have reduced the cultivation of thousands of edible plants to a few dozen: those most functional to the interests of Pioneer, Monsanto and Bayer.

“The role of food as the main culprit of the environmental disaster is emerging in an ever stronger and clearer way. Our movement, which has been committed for thirty years to guaranteeing access to good, clean and fair food for everyone and everyone, must have the courage to assume a leading political role in curbing this drift from catastrophic implications “.

And we also have an important role in this challenge of Carlin / Davide against Bezos / Golia :David was not alone, but he was with the Israelite army, as Golia was with Philistines army.

So we can all be Carlin Petrini’s troops.

Each of us, in our specific life, work and social role, can fight against Amazon: no longer using it to buy goods and food.