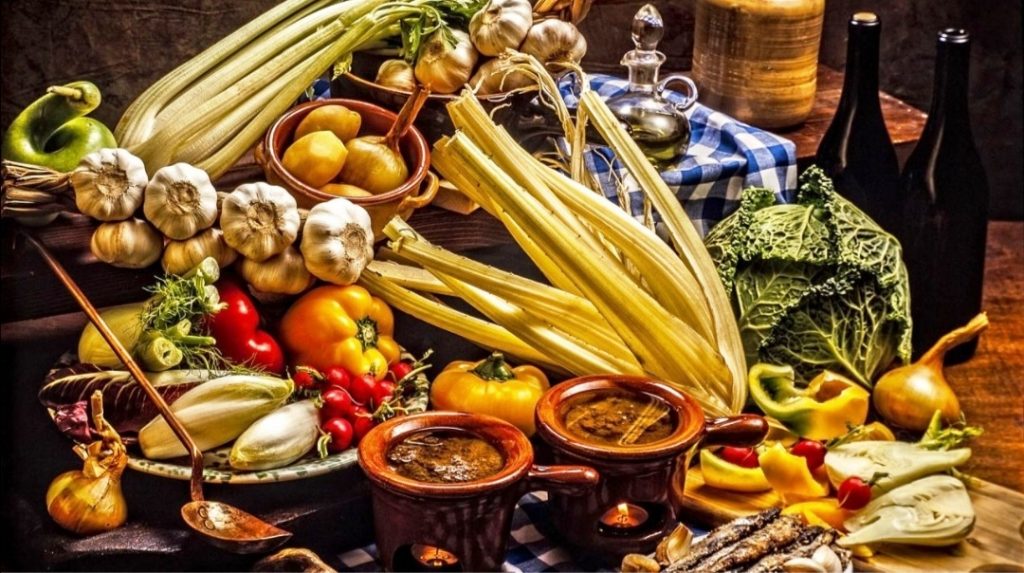 Bagna cauda is a dish with the power to socialize all the diners. The slow act of “dipping” all the seasonal vegetables and of the territory in this hot sauce is pure fraternization. Of course, accompanied by “grissie” bread, sips of red and young wine. Once again, the products of the earth get us to the pleasure of the table. Bagna cauda is a slow food that must be eaten without hurrying and looking at the clock with the fear of being in late.

Bagna Cauda is an emblematic dish especially because it tells us what identity is, to avoid any misunderstanding. There is no doubt that to Piedmonteses [and Italians, ndr] it means an important cultural symbol.

Bagna Cauda is Piedmont because Piedmonteses travelled, doing business with Ligurian neighbors, because they exchanged with other cultures. After all, it is the same for all the other identitary gastronomical symbols: think only about pasta with tomato sauce, the symbol of Italy for excellence. Neither pasta nor tomato came from the ancient Italian origin. The technique to prepare pasta has been imported from Arabs who claimed its invention together with other culture from Asia, while tomato comes from America and has arrived here only after its “discovery”.

Food, as always, reveals who we are. We are the result of a continuous interconnection with the rest of the world, with what surrounds us, with what we get in touch. And the diversity is the only thing that can guarantee us a better future: it is the greatest creative strength that man has available.

For this reason, who loves food must love diversity, as natural one – biodiversity – as the cultural one, that in the end is a mediate projection from humans, because food is nature that becomes culture. Without diversity we are lost, the quality of life deteriorates, problems that begins in agriculture and in all our activities cannot be resolved. We cannot be able to solve the crisis without creating other problems.

Sometimes so much diversity produces uncertainty, for this we have the strong temptation of reducing it, to make everything the same, to homologate, but there is nothing riskier.

So, bagna cauda tells us also the importance of diversity, among other things that can move, besides the memories of conviviality that re-emerges in each Piedmontese as soon he hears the name.

It is our identity, and it tells us to remain an open people.